We landed this morning around 8:30 in the morning. Im not too sure about Alisa, but I have never been able to sleep on a plane. This morning was no different. Alisa slept almost the entire first flight which was about four hours long. Im kind of glad that I was up because from the plane I could see a lightning storm that went on for miles. Above the storm I saw thousands and thousands of stars. It was an amazing perspective that I had never seen before. 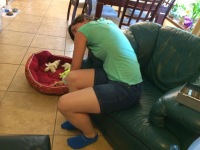 Once we landed, we were greeted at the Airport by my father who drove us back to the house where I slept from about 10:00am till about 4pm. We got a chance to see a the last half of the World cup game between USA and Belgium. Personally, Im not a huge fan of the game, but I got to document the moments Alisa realized that the U.S. would not make it back in the game. 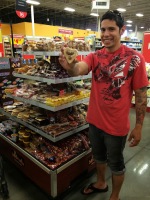 After the game, we headed down to the grocery store H-E-B where we picked up various items for the week and picked up some Mexican candy. After returning home, we were still really tired, so we decided to take a walk around the neighborhood. I showed Alisa the elementary school I attended and different places that I hung out at when I was in high school. Even now, all we can do is lay around. I think we are going to spend the rest of the evening watching some Twilight Zone while eating candy.