We were out the door early yesterday. We met up with Gus and Cherine for some breakfast at Bill

Miller. I had no idea that they did breakfast, and I was really surprised to find out that it was really good. Poor Alisa, the whole time we were eating you could tell that all she wanted to do was go back to sleep. After eating, we followed them to Fiesta Texas. Alisa and I were so surprised when they paid for our day passes and lent us their parking pass so we wouldn’t have to pay the 20 dollar parking fee (thanks again you two!). 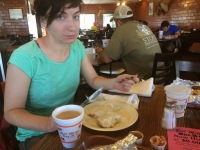 We wanted to start our day out at the water park, but we were nearly two hours early, so we decided to go on the Iron Rattler. I was so happy because the line was so short that we had an opportunity to ride on the first cart. All the times I had visited the theme park, I had never had an opportunity to ride in the front. I have to admit, the experience is incredibly different. While we were waiting in line, Gus and Cherine were telling stories of how scary it is to ride it and Alisa started to look as if she were having second thoughts. The day ended great because we got to ride in the front on every roller coaster except for the one which we hated anyway.

The water park was the best part of the whole place. It was great to run around in the sun and get on all the rides. We went on one that was pretty scary. It´s called the bahama blaster. They put you in a tube and close the door. While you are waiting, you can hear a heart beating. You stand there for what seems like a long time until a trap door drops under your feet and you free fall toward the bottom. While you are waiting in line, if you look up you can see the trap door and the feet of the person waiting to be dropped. While we were in line, Alisa started getting really nervous. I didn’t think that she would go on the ride. When we got to the top, the guy directed us to the tubes. Before we closed the door I snapped a few pictures of Alisa. Right before the guy closed the door I heard her say “wait.” She looked like a wet cat that fell into a tub and couldn’t get out. While we were waiting to drop, it was nerve wracking. I was pretty nervous because I wasn’t sure what was going to happen next. The experience was pretty quick, and I felt as though the anticipation was worse than the ride itself. When we got to the bottom, Alisa looked fine however her hands kept shaking. She told me she was glad she tried it although she kept shaking for a few minutes afterwords.
Another ride that stood out is called the Tornado. However, I think its function can be described better as a toilet flushing simulator. If you ever wanted to know what the matter in a toilet feels like once it’s flushed, I would recommend this ride. After being flushed twice, we reached the conclusion that it must be fun. We were swished around back and fourth into the whirl pool until we were forced into a tube which looked like a drain and on the other end we each had a smile on our face.

We ran around the park the rest of the day like children, and it was great. Gus had a the holy grail of popcorn. It is a container which allows its owner to refill it for only a dollar. I had two bucket-fulls by

myself. He also had a cup which allowed him to refill it an unlimited amount of times for only five dollars. He managed to fill it six times.  Through out the day, we ended up riding almost every roller coaster and every ride that would give you a big scare. We also passed by a building where I used to work when I was in high school. I think I was about sixteen at the time. Toward the end of the evening, Gus and Cherine decided to call it a night and headed home. We decided to stay and check out the laser firework show. It was great to be able to lie on the lawn and relax in the cool Texas night breeze.