We woke this morning with the goal of getting early tickets to go up to the observation deck at the Washington Monument. After washing up, grabbing coffee and fruit, we made it there around 8:45am. However, there were nearly 200 people in line for the tickets. Instead, we decided to to walk to the Holocaust Musem even though it wouldn’t open for another hour. We were glad we did because there was already a line forming; the waiting area was on the side of the building. Alisa mentioned to me after we left that they used really cold architecture in the waiting area. It was in a narrow corridor with dark metal walls and street lamps of the era. Although the museum is free, you can only be admitted on specific time blocks. It wasn’t till we were inside that we realized why they do this. The place gets packed and often times its hard to look at a lot of the exhibits. The museum itself is excellent at explaining in great detail what happened and helping you relate to those who suffered on a personal level. Before you enter the elevator, you have to select a passport from a huge stack that are segregated by men and women. On each floor you have to read a different page which tells you the experience of a real person who was in the camps. It is not till you walk out of the museum that you find out what happened to them after the war. There is a lot of reading and it can be really exhausting, but for those who have the patience it is well worth the time. Alisa and I ended up spending five hours there reading about 90% of all the information displayed. There was a lot that we already knew and a lot of new information that surprised us. The experience itself was really humbling and very depressing however, we are glad that museums like this exists so that this dark time in the 20th century will never be forgotten. On the outside of the exhibit there was memorial wall that quoted the Bible:
Deuteronomy 4:9
“Only give heed to yourself and keep your soul diligently, so that you do not forget the things which your eyes have seen and they do not depart from your heart all the days of your life; but make them known to your sons and your grandsons.” 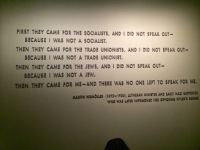 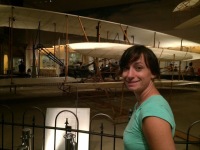 From the  memorial, we went to the Smithsonian Air and Space Museum. We had a lot of fun running around the museum. However, we quickly realized that we didn’t have much time left in the day. Instead of taking time to look at every exhibit, we did the express tour. On more than one occasion, Alisa mentioned that she would have loved to have been there with her dad. It was crazy getting to see actual shuttles or artifacts that I grew up studying in school.  We got to see the actual Wright Flyer, a few real space shuttles and much more. They had an awesome exhibit of the Mars Rover photographs. It was so cute; It was set up like an actual art exhibit with the rover itself as the center piece. While running around, we decided to check out the planetarium. We saw a half hour show explaining how the sun works. Before we left, we decided to check out the gift shop. In the basement we found something that really excited Alisa. It was the actual Star Trek Enterprise model that was used in the original 1966 series. We snapped a whole bunch of pictures, and Alisa spent more time looking at the ship than any other exhibit. After we left the museum, we decided right then and there that we would stay another day to visit the museum again. Honestly, one would need a week to see everything they have on the Washington Mall. From there we headed to the Capital building and the Conservatory. It was pretty late at that point and everything was either closing or closed, so we all we could do was take a few pictures. All in all, we were either on our feet or walking for eleven hours straight. We walked toward the hotel and had dinner at a Mexican restaurant (it was my idea).