We woke up this morning around eight. After washing up, we headed down stairs where where we were greeted by a woman who we hadn’t met. She prepared coffee and liquado for us (liquado here means a morning fruit smoothie). Alisa and I talked with Hugo for a bit and decided that we would walk to Antigua. Before leaving the house, Hugo gave me a key to the house and told us that we could come and go as we please and to treat his home like our own. Once we walked out and shut the front door, I was actually a little scared. This was the our first day on the streets by ourselves. When you walk down the streets here it’s a different world, and we stick out like a sore thumb. I cant really put into words the differences, but lets just say that you feel really exposed and vulnerable.   We started down the route that Hugo suggested, and once we got to the first turn there was a huge parade. Now, we had no idea that there would be one, so we stopped for a few minuets and watched. The funny thing about this parade is that there were soldiers carrying machine guns and little kids playing instruments. It was an odd sight to see, but super interesting. We made our way through the crowd for about five blocks and turned onto another road which would take us to Antigua.

We walked for some time through the neighborhoods. One thing that’s really different between here and the U.S. is that the streets are always full of people doing random things. Any street you walk down, you will find someone trying to sell you food, clothing, or some kind of small trinket and it’s not only in tourist areas. When Alisa and I were en route to Antigua, a man came up to us and tried to sell us a small round flute. I really didnt want to buy it, but the man kept insisting. He was trying to sell it for 100Q which is about 13 dollars U.S., but I had no interest. However, the man kept insisting and insisting, so I ended up buying it for 40Q or roughly 5.5 dollars (I still think I payed too much for it). I learned a valuable lesson–if you don’t want to buy something you just have to keep walking or else they will keep insisting that you need to buy it or to make them an offer. Alisa and I got really good at it toward the end of the day. Actually, living in Portland has been pretty useful because we often have to ignore lazy hipsters on the streets who are always asking for your money or your signature. It’s a little different here, but the principle is the same. 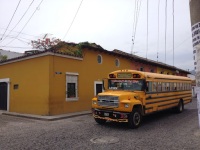 Walking through the streets

After walking for a bit and checking our map several times, we arrived at el parque central, we had to stop and have some type of solid food before exploring the city. While in route to find some food, we found a small book store and decided to see if they carried the same lonely planet book I had left on the plane. Luckily they carried it however they wanted 262Q for it ($33). We knew it was going to be expensive, but that was a lot of money. We noticed that farther inside the building there was a restaurant, so we walked inside, found a map of the city, and were asked if we wanted to sit down for a meal. We took a seat inside…Kind of. It’s kind of hard to explain, but when you go into a building here, the middle of it is completely open to the outside. Although we sat inside, we also sat outside at the same time. We had coffee, breakfast/lunch and a seasonal fruit dish for only 124Q ($16) dollars which included the tip. As we ate, we decided that we should just buy the over priced book and be done with it. 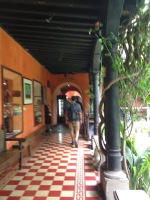 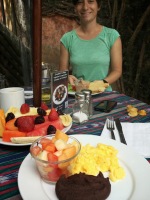 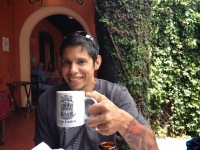 We sat both inside and outside at the same time

After eating, we walked around for quite some time alternating between lost and not sure if we’re lost. We had a map of the city that showed the location of the tourist center. However, after walking around for a good half an hour, we finally stopped an asked someone for directions. It turns out that the tourist center moved several blocks down the road, but the map had not been updated. Fortunately, behind the guy that gave us directions were the ruins of an old church called Iglesia y Conventa de las Capuchinas which was destroyed in a huge earthquake some time ago. Alisa and I decided to check it out, and it turned out to be the best part of our day. Once you are inside you can freely walk into almost every room.

They have the old church which is empty and so huge it’s almost indescribable and photos really cant do it justice. We walked around the old living quarters of the nuns, an underground room that was designed to reflect and amplify the slightest sounds (this room was worth the 40Q), and the many gardens that surround it. We spent a couple of hours admiring the buildings before we decided to move on. Afterwards, we headed to the nearest coffee shop were we ran into a group of guys in their late 40’s from Texas who were there doing missionary work. We chatted with them for a long time and enjoyed our coffee. 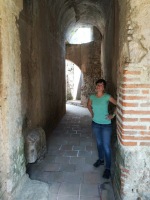 Walking into the sound room

We continued our journey through the city via the rich side of town. It’s easy to spot because it’s a lot cleaner that the other parts. We explored this area for a bit and decided to check out one of the local Spanish schools there. Afterwards, we headed to another Iglesia called Iglesa San Fransico. We decided not to go in as it was starting to get late and we didn’t feel like paying another admission fee.

However, surrounding the Iglesia were a whole bunch of little old ladies making clothing. We stopped for a bit and the haggling began. I spotted a blue shirt that I really liked, however, It was a little too expensive (170Q). I told her no, but she wanted me to name a price. Again, I told her no, and she insisted that I offer a price, so I offered her 70Q. She said that was too low and counter offered with 160Q to which I responded with 80Q. Then the truth came out. She offered 90Q and said she wouldn’t go any lower. Alisa picked a scarf that she liked, and the lady said it would be 40Q. I offered 120Q for the shirt and the scarf and she agreed ($15). I didn’t realize how much I liked haggling. We tried our luck a few hours later with a pair of sandals that Alisa really liked. The guy said they would be 270Q, but I offered 80Q and not a penny more. He responded with 200 and I said no. Then he said 95Q, and I said 90Q and we left with a brand new pair of sandals (we talked him down from $36 to $11.50). My one regret is that we bought a pair of nail clipper for 7Q without haggling for it. I bet I could have gotten it down to 3Q.

When we left the market, it was raining. Hugo recommended that we take a Tuktuk back to his house however we couldn’t find one. We ran toward a market and by this time it was night out. As we were walking the the busy streets, the power kept going out. It was kind of scary. We would run through a lit market and then it would be completely dark and people would start yelling. At this point in the evening we were very lost. There were no more tourists around and it was a little nerve-racking, so we decided to pull out the map and try to orient ourselves. After walking a bit we found a tuktuk that would take us back for 15Q ($1.90). What we didn’t know was that for that price, we would also get something akin to a roller coaster ride through the city. These little cars are not for the faint of heart. There are no seat belts and no doors. The driver weaves in and out of traffic and spends more time on the wrong side of the road that the right.

We arrived at Hugo’s house around 7:30 and ate dinner with his wife and their niece. We had Caldo de rez, and talked for a long time about our day and my negotiating skills. Alisa and I tried really hard to only speak Spanish that day, and we were really successful. However, by the time we were eating it was very difficult to continue. It was a great first day, and we are looking forward to doing it again tomorrow.