We decided to finally head to Azotea; it’s a company that grows coffee beans and roast them several blocks away from where we are staying. However, we were a little delayed before we left because we ended up looking at some pictures of our vacation with Hugo and Estella for a really long time. Hugo also asked me to help him figure out some problems with his computer. Since Azotea was so close, we decided to walk there. This route required us to walk down a completely different path we had not yet taken. The roads here can be very suffocating and this one was no different. The road looks more like a small alleyway and yet it still functions as a two way street. Like every other road here, there were people selling different things at nearly every building. It seems to me that nearly everyone here uses their living room as some kind of general store. After about 25 minuets of walking and checking out the area, we finally arrived at Azotea. 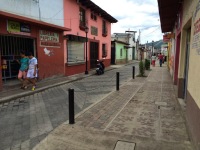 It cost Q100 to enter the museum which included a guided tour through the coffee growing/roasting process and a tour through their collection of Mayan Instruments. What we didn’t know was that all the tours were all done for the day. We entered the museum and right away each ordered a cup of coffee to keep us hydrated for our walk through the exhibit. The place was great at explaining how they produced coffee from the ground to a finished product and we got a chance to see some really cool vintage coffee grinding/brewing items. We also got a chance to walk around the area where they actually produce the coffee. Right now it’s the off season so there wasn’t really that much going on, but it was still interesting none the less. Unfortunately for us, the museum closed early on Saturday and we had to rush through most of the exhibits especially the Mayan music museum. On our way out, I asked the lady if she had a schedule for the tours and she told me that since we had purchased tickets, we could come back any time and take a tour. We were really grateful and headed home.

When we arrived at the house, lunch was almost ready. We decided to contribute to the lunch by sharing some of the chocolate that we purchased at the ChocoMuseo and a bottle of Wine that we bought from a local artisan market which was made out of a fruit called ciruela. We sat down enjoyed some chicken chow mein with corn tortillas (everything here is eaten with corn tortillas). After lunch we had a great conversation for a couple of hours and got a chance to know our hosts a lot better.
We decided that evening that we were ready to head to Panajachel and have some type of off the wall adventure. Hugo recommended that we shouldn’t reserve a hotel because we could get much better rates if we just showed up. I’m not sure how I feel about that even now, but why not try. We headed back to Antigua and went to a travel service and bought two shuttle tickets to Panajachel for Sunday at 4pm. Before we leave, however, we are gonna try to catch a futból game between Antigua and Coatepeque. We walked around the city for a bit and found a few spots that interested us. We found a great gift shop with probably some of the best prices we have seen. It gave us a good base for whats out there so the next time we needed to haggle we can do it with a little more confidence. Our thought that this was a great shop were confirmed when we spotted a cat walking around. It stopped and let us pet him for along time.

Around 9pm, we decided it was time to head back. We walked toward the chicken bus station but everything was quiet. It was really creepy to see the place so dead. We didn’t want to walk the mile and a half back to Jocotenango in the dark so we decided that we should just take a tuktuk. We spotted one on the side of the road but he wanted Q25 for the ride. I didn’t feel like getting ripped off so we just walked away. He tried to sweeten the deal with Q23, but we weren’t interested. We walked around for a bit and decided to head in the general direction of the house and catch a tuktuk on the way, but we never saw one. We ended up walking all the way in the dark. It was a little eerie especially because we don’t really know how this place is at night. However, we were never really confronted with anything uncomfortable and beside being a little nervous, it was a pleasant walk. However, we did have our pepper sprays in hand just in case. 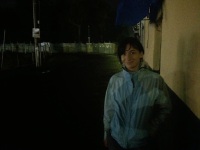